Untold Tales From The Bush Leagues: A Behind The Scenes Look Into Minor League Baseball, From The Broadcasters Who Called The Action (English Edition) por Rick Schultz 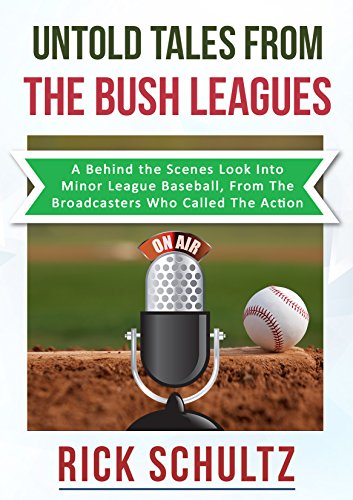 Rick Schultz con Untold Tales From The Bush Leagues: A Behind The Scenes Look Into Minor League Baseball, From The Broadcasters Who Called The Action (English Edition)

Ever wonder what minor league baseball is really like behind the scenes? Are you a baseball fan that wants to get closer than ever to the action? This book pulls back the curtain to share the true and (until now) untold tales of America's national pastime.
Fans of all ages can read some of the most jaw-dropping, eye-opening stories from life in minor league baseball!

Join more than 20 professional baseball broadcasters from across the country, as they recall nearly 100 unbelievable tales from their years in the bush leagues. The most hilarious, wacky, amazing and surprising stories you'll ever hear - all told by the announcers who watched it happen.
Untold Tales From The Bush Leagues includes stories featuring notable baseball stars as well as names you've never heard. Some of the names you'll know include Michael Jordan, Tommy Lasorda, Tony Gwynn, Gary Carter, Josh Hamilton and many more!
You'll be amazed at what really happens behind the scenes in minor league baseball! I mean, really amazed. What do players do on the team bus? How do they occupy time in the clubhouse? What do they say to each other on the field?
You'll hear stories about the most zany things that really happen in minor league baseball, such as....
How did one broadcaster call a no hitter when he never saw even one pitch?
What did one player eat off of the infield dirt during a rain delay?
What were some of the most hilarious practical jokes players have pulled?
How do teams pass the time on long bus rides?
Why was one bunch of hungry players walking on a lonely, dark street around midnight?
Why was Tony Gwynn intently watching one particular minor league game?
What happened when the broadcaster accidentally let the wrong words fly live on the air?
What did Tommy Lasorda once do in a fast-food restaurant?
How did these teams escape near disaster during late-night bus rides?
What special pregame meal did Josh Hamilton enjoy?
What was the umpire so angry when he stepped into the hotel elevator?
How did Michael Jordan spend some off-time while playing minor league baseball?
Why did one public address announcer almost get in a fist fight with a former major leaguer?
What tool did one broadcaster use to find true love at the ballpark?
Untold Tales From The Bush Leagues will pull back the curtain on these and many other true stories from baseball's minor leagues.
Join Rick Schultz and 21 professional baseball broadcasters, as they share the most amazing, zany, funny stories from their career.

Truly a must-read for baseball fans of all ages!